If you think you don’t need a barn because you have farm animals, hay, or tractors to store away. But you’d be wrong — while barns are traditionally known as farm buildings, the reality is that they can be used for anything and everything. And, when you use our online design tool to create your own completely custom barn, you can have a building that’s tailor-made for your exact preferences.

At Boyle Buildings, we help people all over the country with custom metal buildings. You dream up a design, and we provide the parts and installation. For buildings such as barns, carports, and garages, it’s nice being able to have a design that’s custom-made for your unique needs.

Whether you own a farm and you need to house some livestock, or you’re simply looking for a nice big building to store vehicles in, you’ll love the variety of options that you have in designing your own custom barn. Keep reading to learn about all the many possibilities at your disposal when you work with Boyle Buildings to implement a barn onto your property.

Barns vs. Garages Benefits of Barns Designing Your Own Custom Barns Ordering Your Barn Get Started Today

Barns, more than anything else, are used for storage. Regardless of whether you’re storing livestock, large vehicles, or just a huge assortment of random junk, that’s essentially what it comes down to. So, you might be wondering, why go for a barn over a normal garage?

Ultimately, there’s not a whole lot of differences between the two, aside from the general intent of the building, which you’re free to subvert however you want. Garages are typically smaller, have a low-ceiling, and are meant primarily for storing vehicles and tools. Garages are usually bigger, wider, and are meant for storing farming implements, from hay, to livestock, to tractors. But, in reality, there’s nothing stopping you from using a barn like a garage. The difference is mostly pedantic — it might be called a barn because it’s “barn-shaped,” but at the end of the day, your custom building is whatever you want it to be.

Barns can overlap with garages, and garages can overlap with barns. But, speaking in a very general sense, barns usually have higher ceilings, multiple sections, and more square-footage. It’s up to you what you want to call it, but barns are a great place to start if you’re looking for a sizable custom building.

The Benefits of Metal Barns

The greatest advantage of barns is their space and their versatility. You can really use a barn for just about anything, especially when the design is up to you. With full control over the doors, windows, and walls, you alone will define the potential of your building. But regardless of the design, here are some benefits you’ll get from pretty much any barn 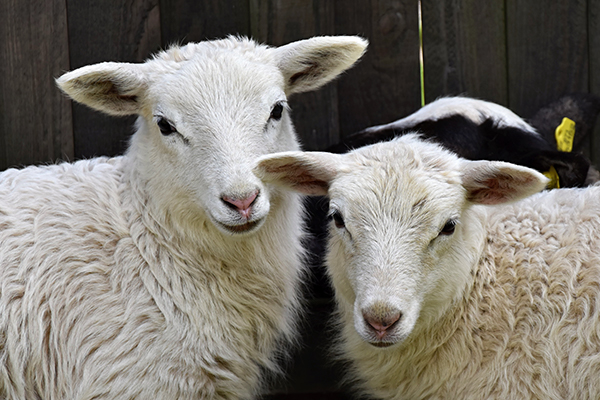 They Can Protect Your Investments

The most obvious use for a barn is to house animals and livestock, so we’d be remiss not to mention that. Many of our customers haven’t farmed a day in their lives, but many have, and some people are looking for a good old-fashioned animal barn that fulfills its traditional purpose without any fancy bells or whistles.

Barns are much more ideal for storing animals than, say, a large garage. The segmented design of barns makes it much easier to create dedicated areas for animals that are partitioned from one another. The higher ceilings are less claustrophobic, and because barns are usually pretty big, it leaves a lot of room for your animals to move around.

If you order from Boyle Buildings, we can guarantee a barn that’s well-made and sturdy. The doors and windows will create a tight seal, allowing your animals to be much warmer at night than they would be outside. While electricity and built-in heating is an additional, separate expense, even a powerless building will keep animals much safer and warmer.

Bars Are Great for Protecting Your Vehicles

Do you have a tractor that needs a home in a nice spacious building? Barns are the best choice, no doubt. But don’t limit yourself to just tractors — barns are great storage spaces for a variety of different cars. Barns are usually pretty big, being able to fit multiple vehicles instead of being limited to one or two like most standard-sized garages. They’re also great for larger vehicles that aren’t frequently used, such as boats, trailers, RVs, and more. Yes, you could get a custom carport or garage to fulfill the same purpose, but a barn allows for more versatile. You can keep your vehicle in one quarter, and still have a workspace and a storage area to spare.

In other words, a barn allows you to store your vehicles just like with any other building, but it also allows you to kill two birds with one stone if you’re looking for additional space anyway. They’re also good for out-of-use vehicles — if you’ve got an old run-down car you’re trying to restore, maybe you put it in the barn to save valuable garage space that your day-to-day vehicle could be using. 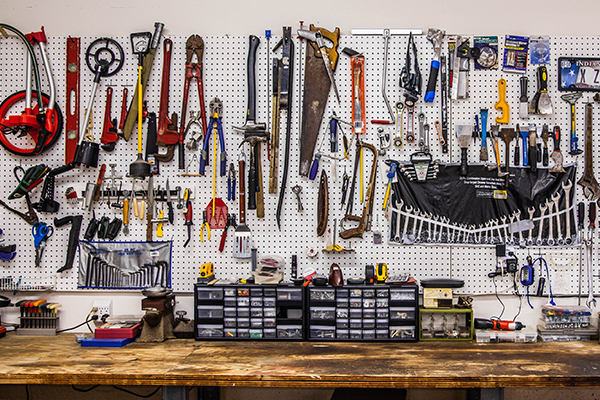 Barns Are the Ultimate Storage Building

Do have a whole lot of junk that you’re not quite ready to get rid of, but you also don’t want it lying around your home and property? Some people skip the storage shed and upgrade straight to a full-fledged barn, which functions like a mini warehouse for homeowners. Barns provide a generous amount of room, and if you’re not using the space for anything else, it’s doubtful you’ll run out square-footage. Not only that, but barns can potentially be outfitted with a loft area, something you won’t find in smaller buildings such as garages. There’s nothing that’s quite as useful as being able to double your storage space.

In traditional farm settings, barns are used to store hay and farming equipment. But that doesn’t mean you can’t use it for regular stuff too. If you want to design your own custom barn that will basically be a glorified storage shed, we won’t stop you — we’ll help make it happen! 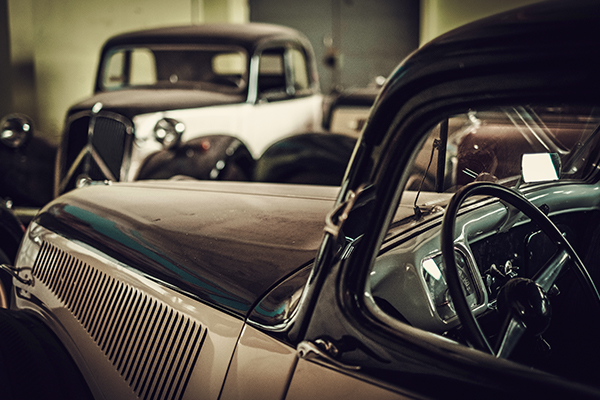 Barns Can Be Almost Anything You Want Them to Be

We’ve already hammered this point home quite a bit, but it deserves repetition because it’s at the very core of what we do at Boyle Buildings. When you create your own custom building, it may have a name such as garage or barn, depending on its shape and size. But ultimately, it’s your custom building, and there aren’t any “barn police” that are going to knock on your door and arrest you for using it wrong. Your custom barn can be anything you want it to be. Imagine what you could do with an entirely new and spacious building on your property!

Here are some ideas: 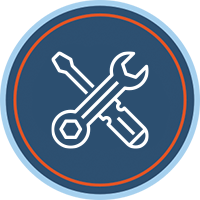 A Workshop: Do you have a hobby or job that requires a large amount of space? A barn can give you all the room you need. For hobbyists or artisans who are deep into their craft, it’s often not enough to have a simple garage. Barns are sometimes used as woodworking stations, mechanic garages, painting studios, and much more. 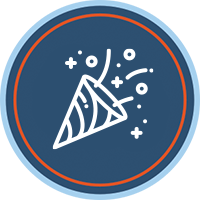 A Party Spot: This isn’t the first thing that people think of when they picture a barn, but a barn can actually be a great compliment to a party or a gathering of friends and family! This mainly applies for warm seasons where you’re spending time outdoors, but you certainly won’t regret investing in a barn when you’re using it as a flashy dance floor. 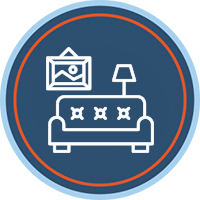 A Living Space: If you really want to “think outside the barn,” consider turning your building into a living space. Boyle Buildings barns aren’t natively wired with electricity or utilities, but it is possible to get those things installed. Spend some time refinishing it, and you’ve got yourself a new, miniature home on your property! 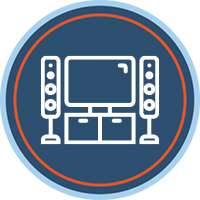 The Ultimate Man-Cave: Sometimes, you just need a dedicated space for all your cool stuff. Whether you want to call it a man-cave, a she-shed, or just an entertainment room, a barn can provide the space you need to have it all — a home theater, a personal collection, pool- and ping-pong tables, you name it.

We could name ideas all day, but you’re the only one who knows exactly what you want for your barn. So why not get to work designing it? At Boyle Buildings, we provide a useful online design tool that allows you to create the metal barn of your dreams. You can play around with size, scale, ceiling, doors, windows, paint job, and just about everything else. As you go along creating your building, the tool will generate a custom estimate based on your design and location!

Note that the online builder is meant to provide a reasonable estimate of your building, not an exact blueprint. We will let you know if the final design requires any changes from your online mockup. 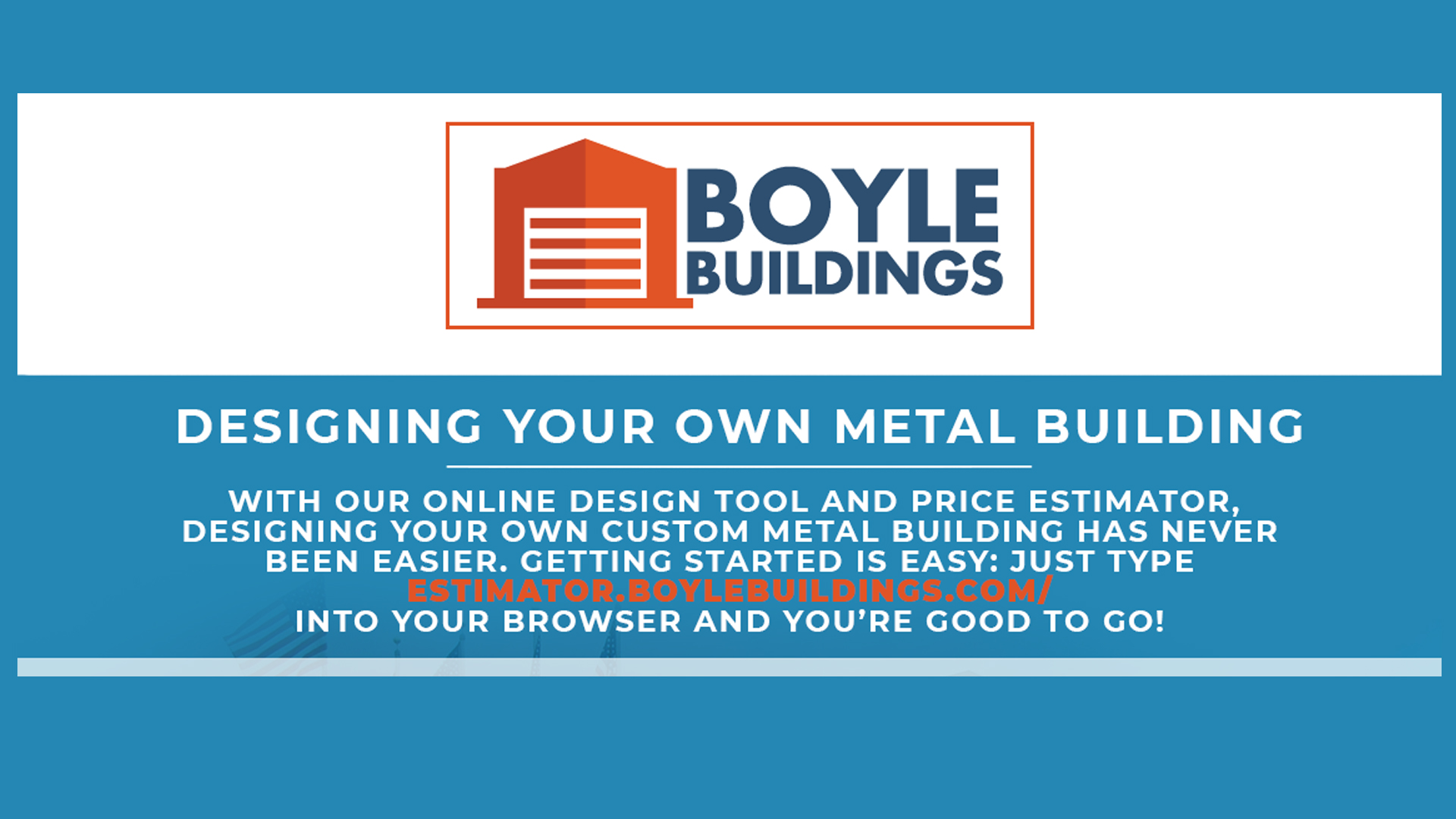 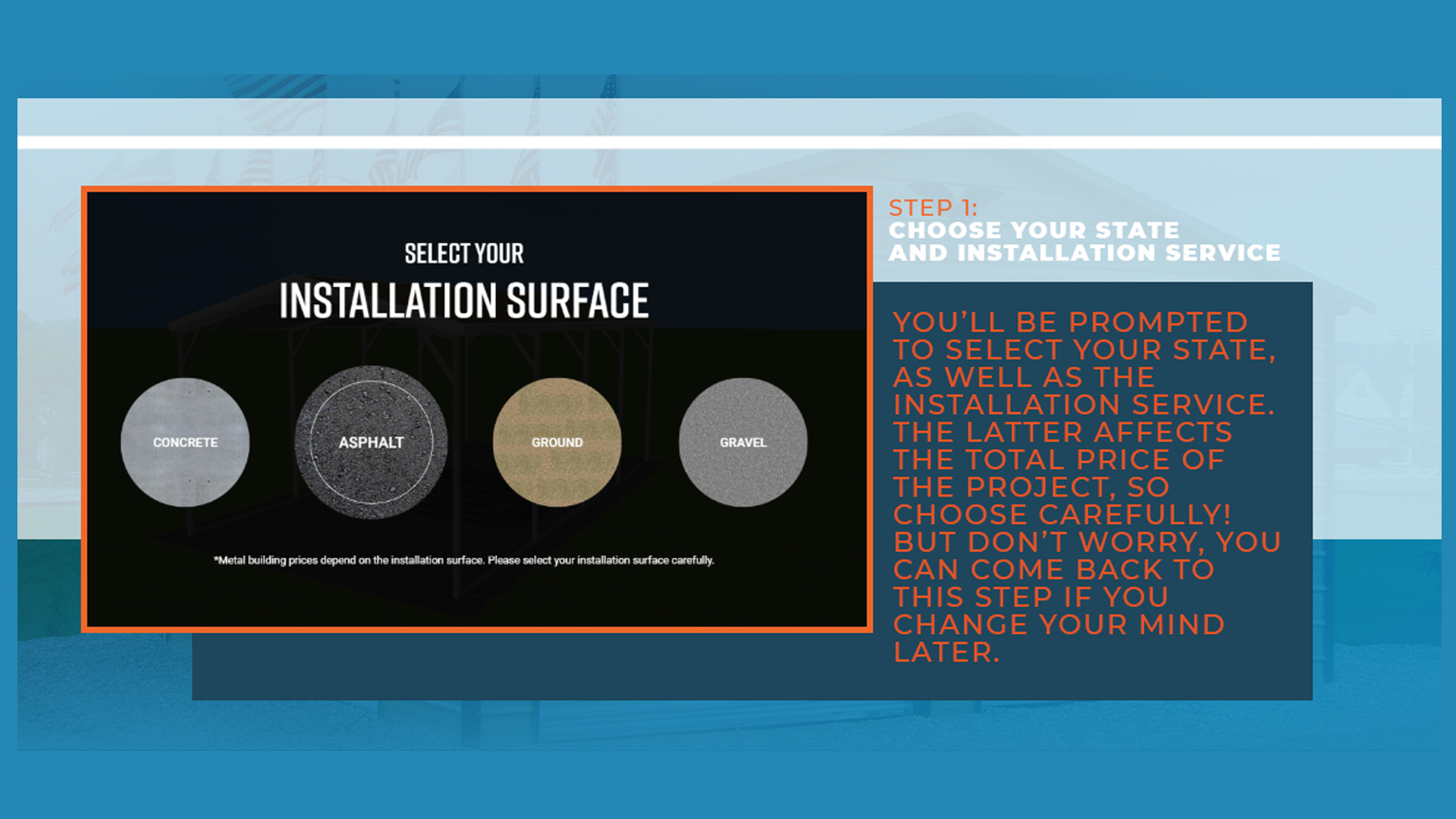 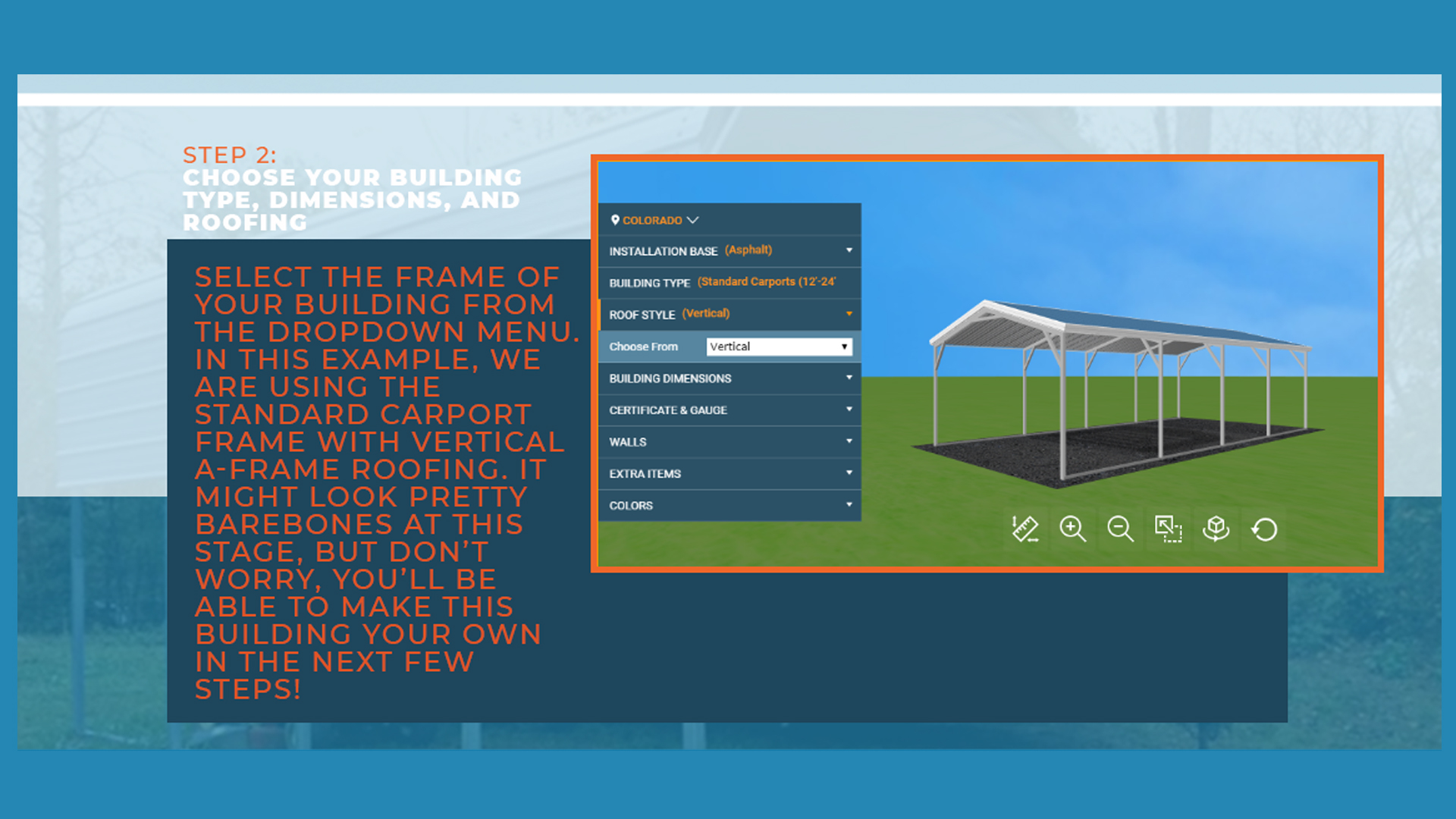 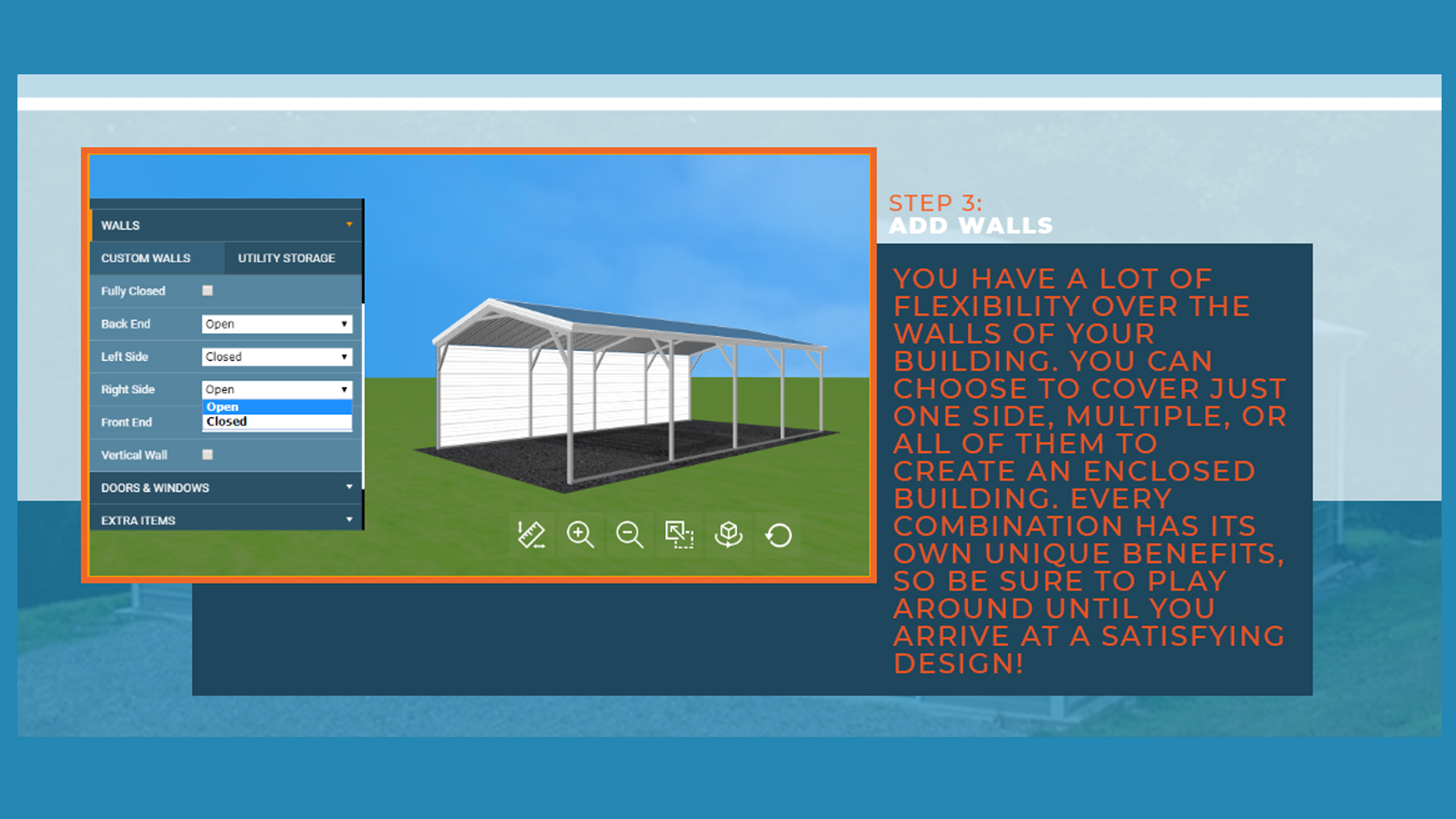 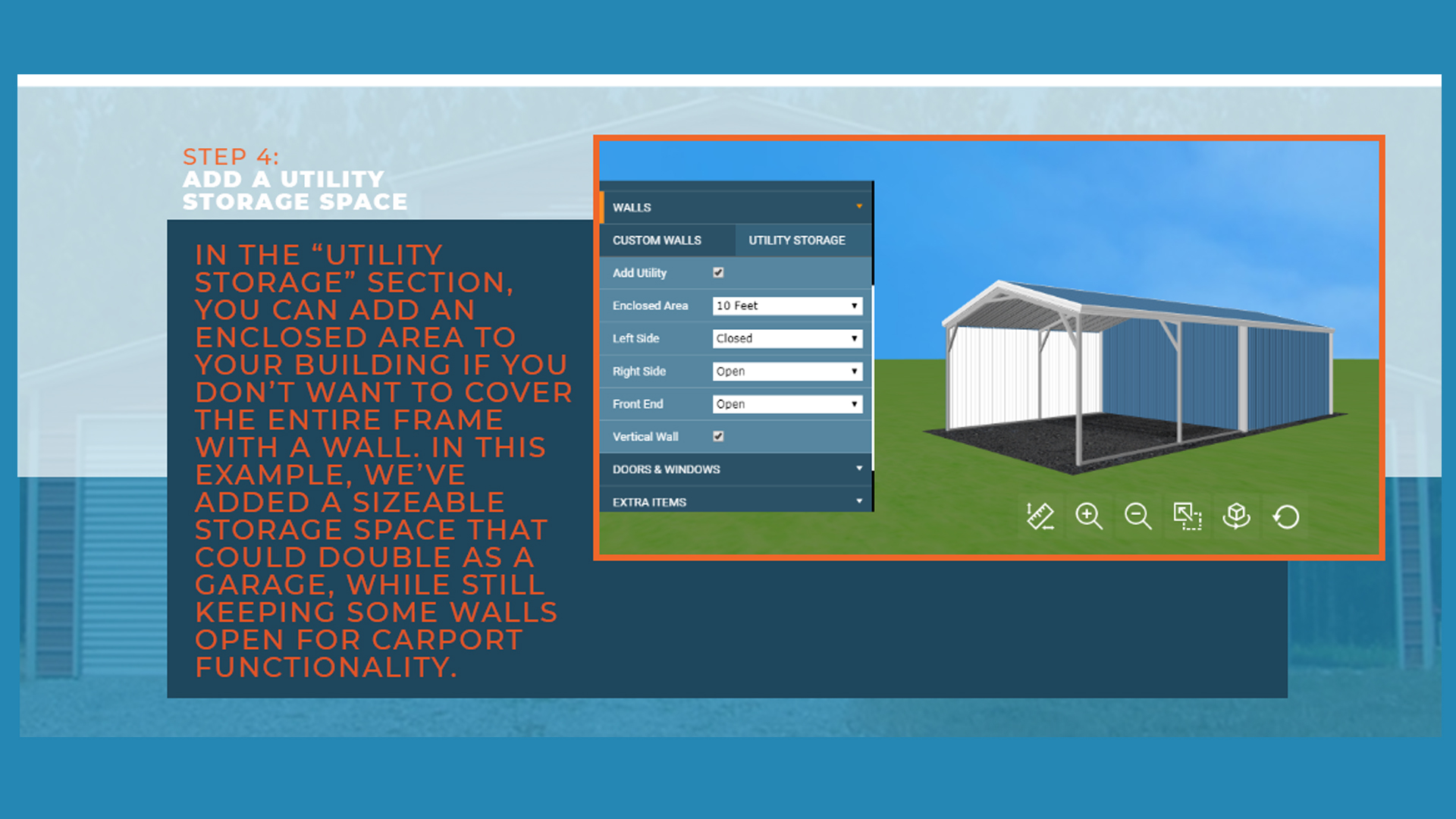 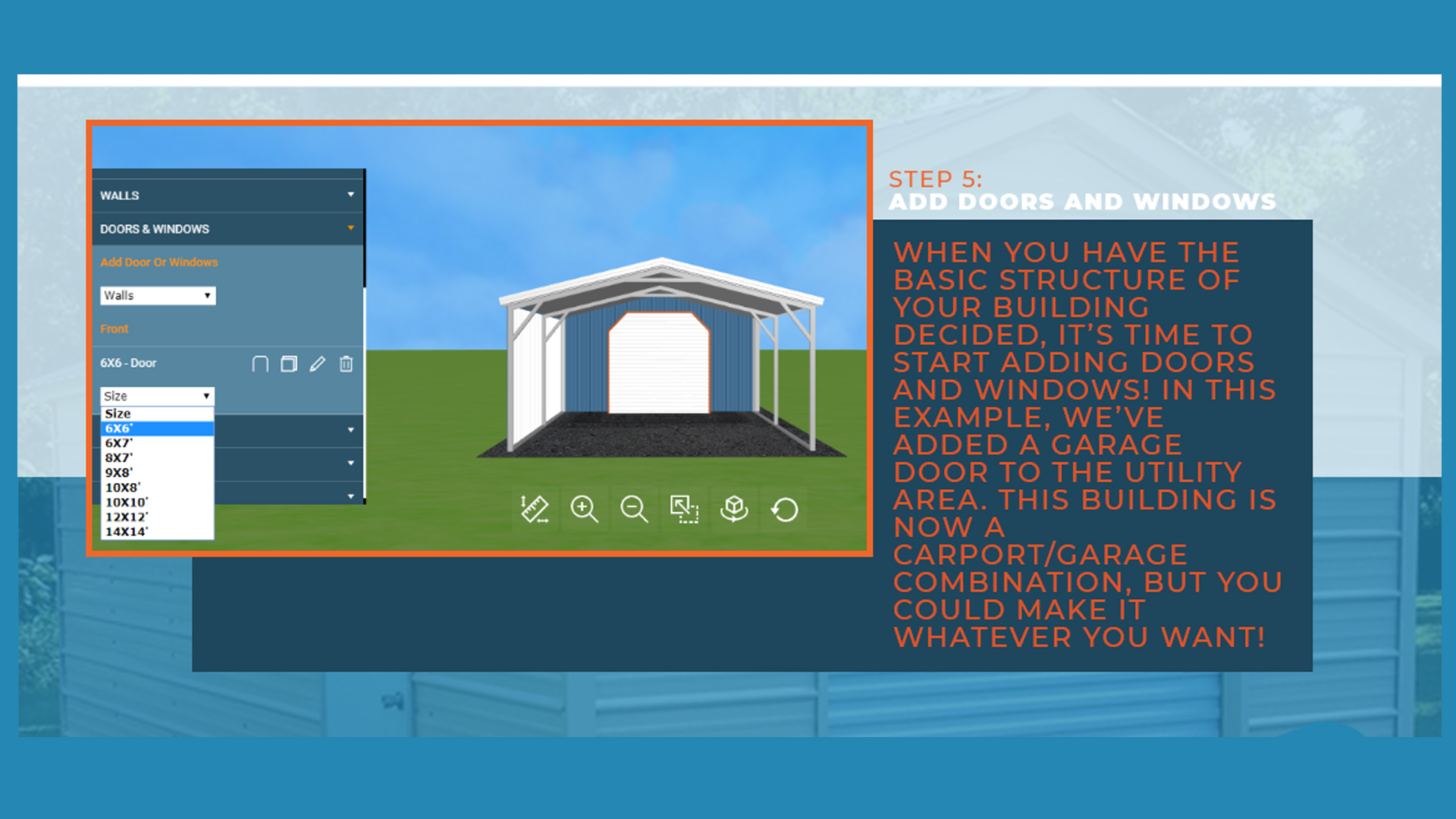 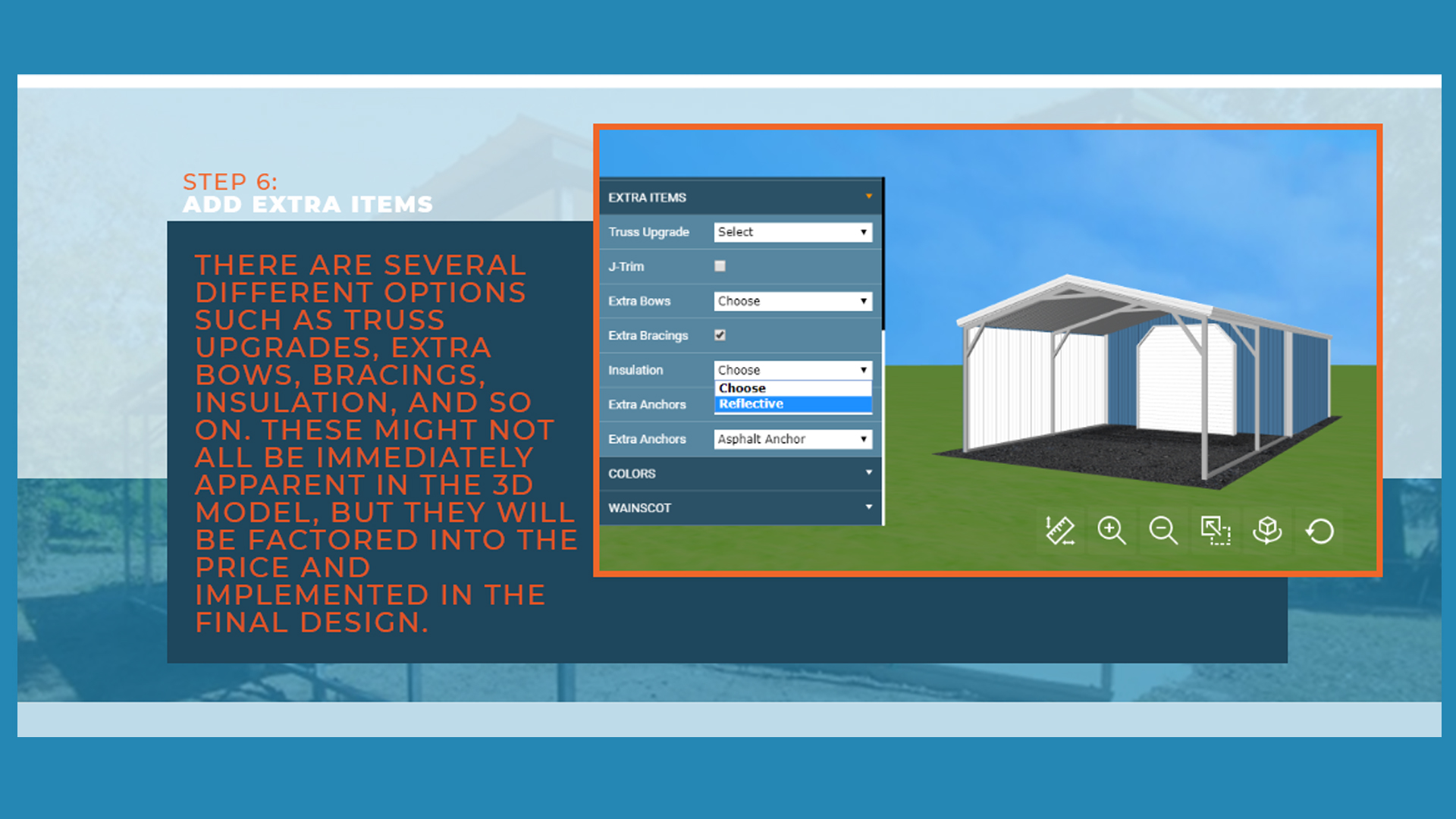 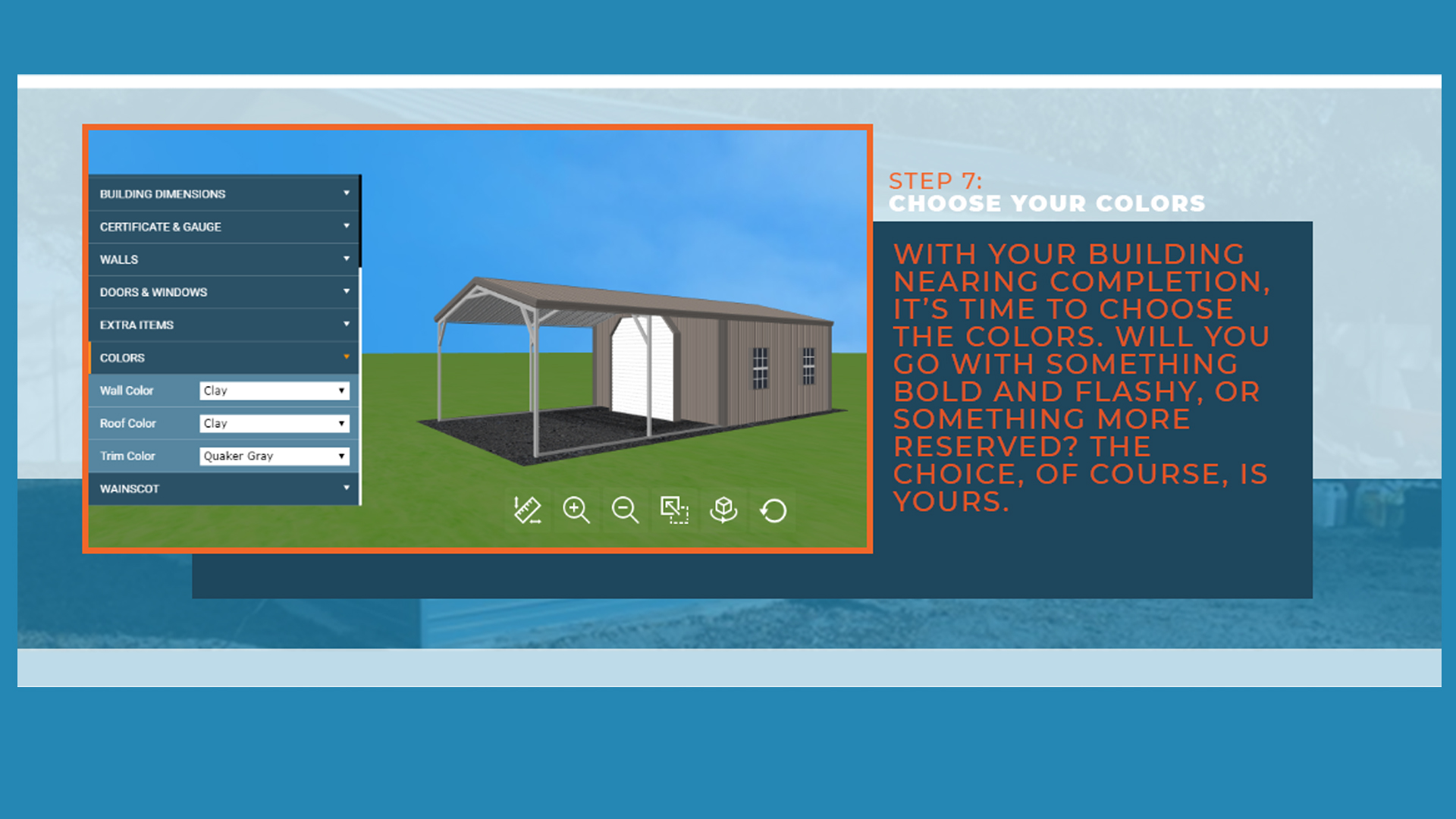 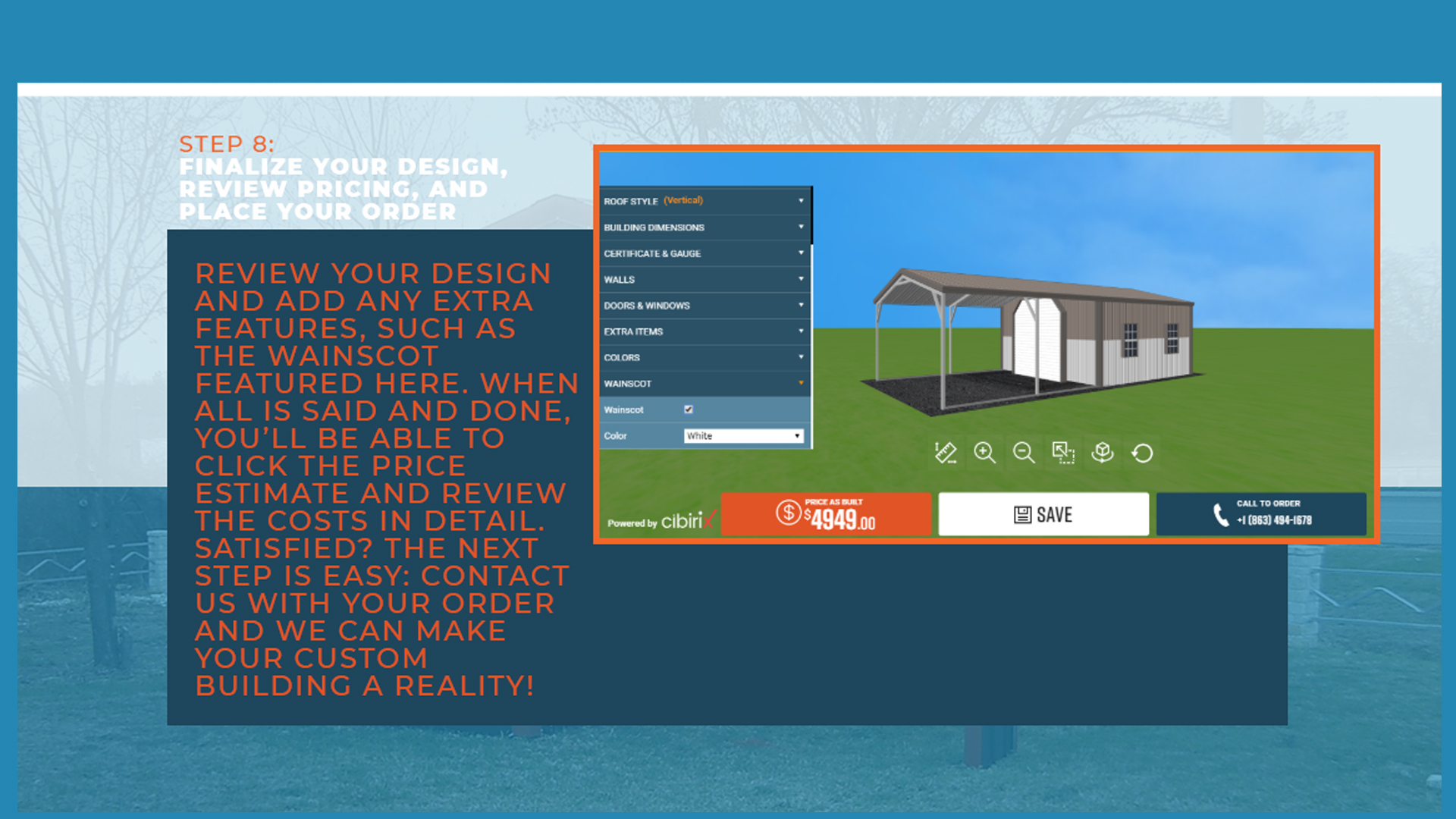 Once you’ve designed your metal barn, it’s time to order it! At Boyle Buildings, we work closely with each and every customer to ensure that the order, delivery, and installation process is carried out to their exact needs and preferences. 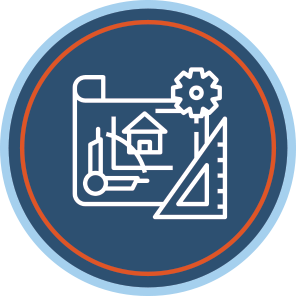 Reviewing The Design and Price Estimate

Before you submit your design, be sure to check that everything is exactly how you want it. There are a lot of design quirks you have control over, so make sure you’ve gone through every single one to confirm you haven’t missed anything. Also, pay attention to cosmetic details such as colors! This can have an effect on the final price. When your design is ready, press that “save” button to send it to our team.

Our online design tool provides a general framework for what your barn looks like, but it’s important to remember that it’s not an exact, 1:1 blueprint. Once your design is finished, our team at Boyle Buildings will personally review it and create a design plan that meets your specifications. We will then provide a quote, which may or may not be different from the estimate provided by the builder. If you find everything agreeable, all you have to do is confirm the order and we’ll take care of the rest! 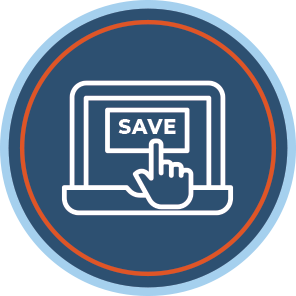 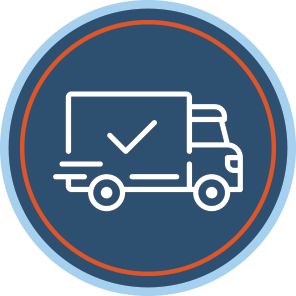 At Boyle Buildings, we’re headquartered in Florida, and your shipping prices/delivery times will vary depending on where you live. The farther you are from us, the higher the shipping cost will be.

Once ordered, we may be able to arrange for a team of professionals to install it for you. We’ll let you know about installation options when we get in touch with you — it varies depending on location.

Design Your Own Barn Today

Did you have a perfect dream barn in mind as you read through this page? Are you absolutely clueless except for the fact that you know you want one? Whether you have a clear design in mind or only a foggy idea, we invite you to check out our custom metal barn design tool. You can create barns, carports, garages, or even a combination of all those things — the sky is the limit! We can’t wait to see what you dream up, and in the meantime, please contact us if you have any questions. 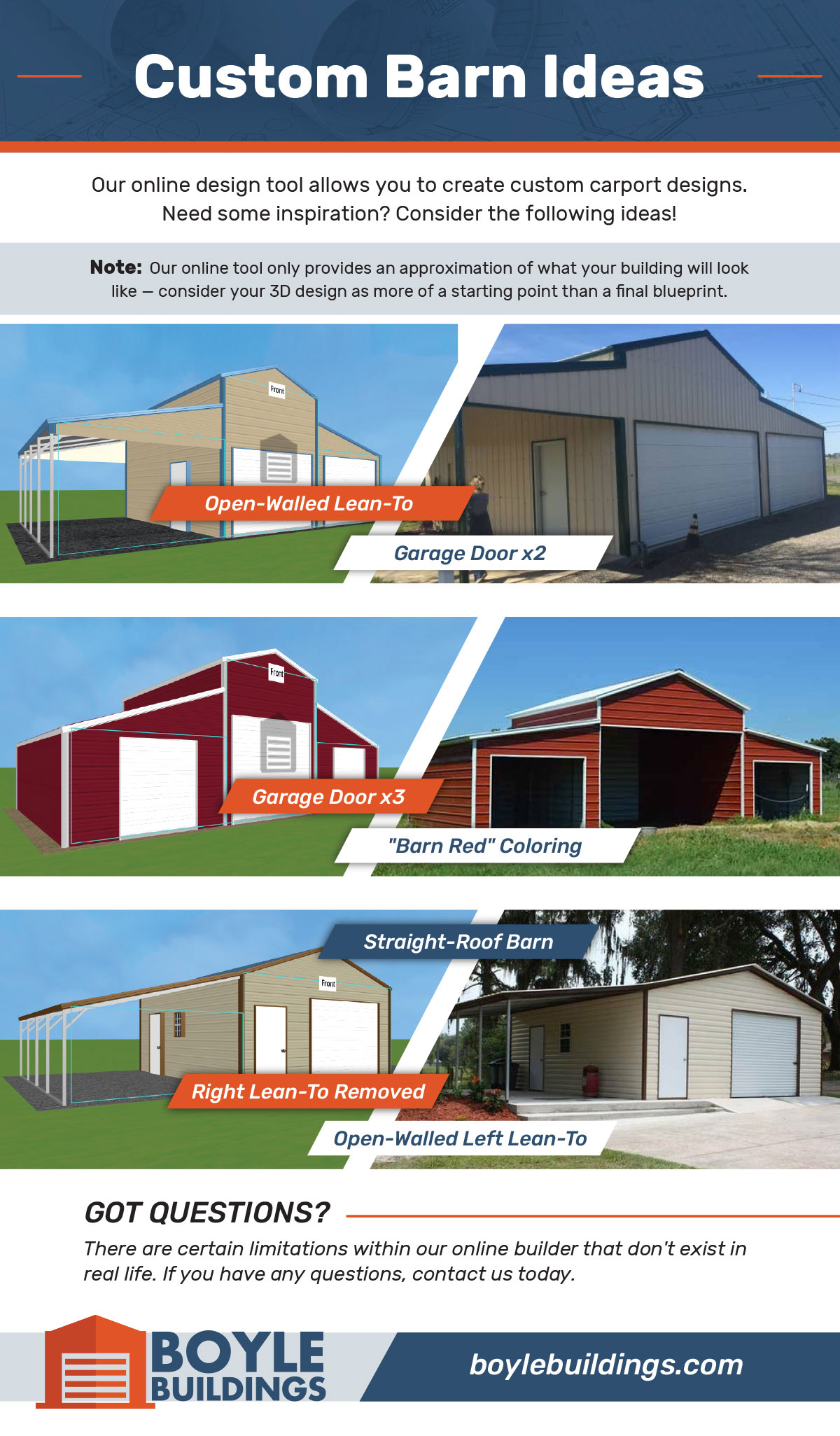